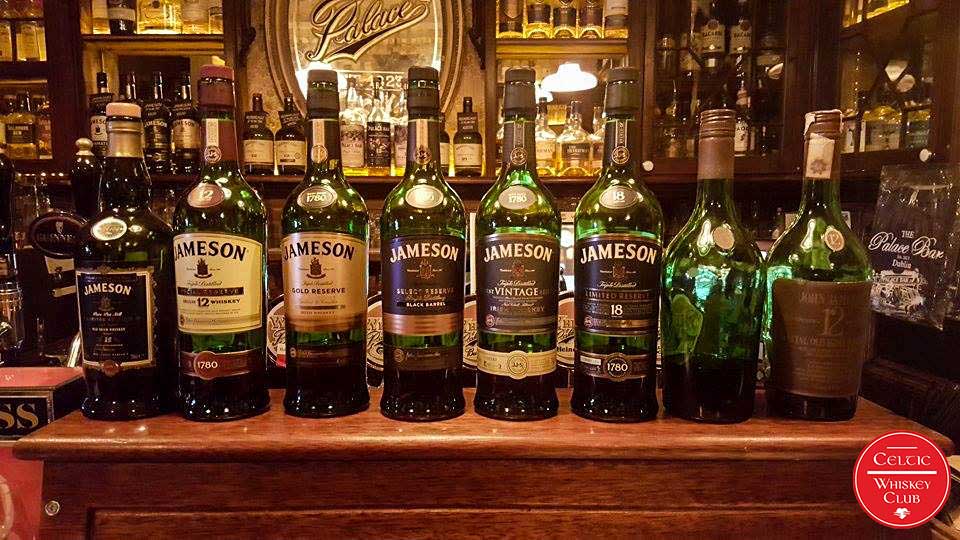 On Thursday February 11th, we were cordially received by the Palace Bar Dublin for a Special Reserve Jameson Tasting with Gerard Garland organised by the Celtic Whiskey Shop.

The upstairs bar packed with the best whiskey connoisseurs, and an impressive Special Reserve line-up awaiting, the night promised to be brilliant. There was palpable excitement in the air about the opportunity to taste eight Jameson Special Reserves introduced by Gerard Garland, Irish Distillers Whiskey Ambassador. Among them, recent fine releases as well as very rare and old bottling, including Jameson bottles from the Old Jameson Distillery, once called the ‘Bow Street Distillery’.

About the Palace Bar

Built in 1823, the Palace Bar has a typical Victorian Pub décor, unperturbed by the passage of time. Like in the 1940’s 50s, under the patronage of R.M. (Berthie) Smyllie then editor of the Irish Times, you can feel that you are in the home of international fame, intellectual refreshment and best Irish sport writers and musicians. Located in Fleet Street, The Palace bar is considered as one of the top whiskey bars in Dublin. The Palace is so committed to local, Irish whiskey, that they’ve released their own whiskey brand and dedicated their upstairs to a whiskey bar, ideal for whiskey tastings like ours. 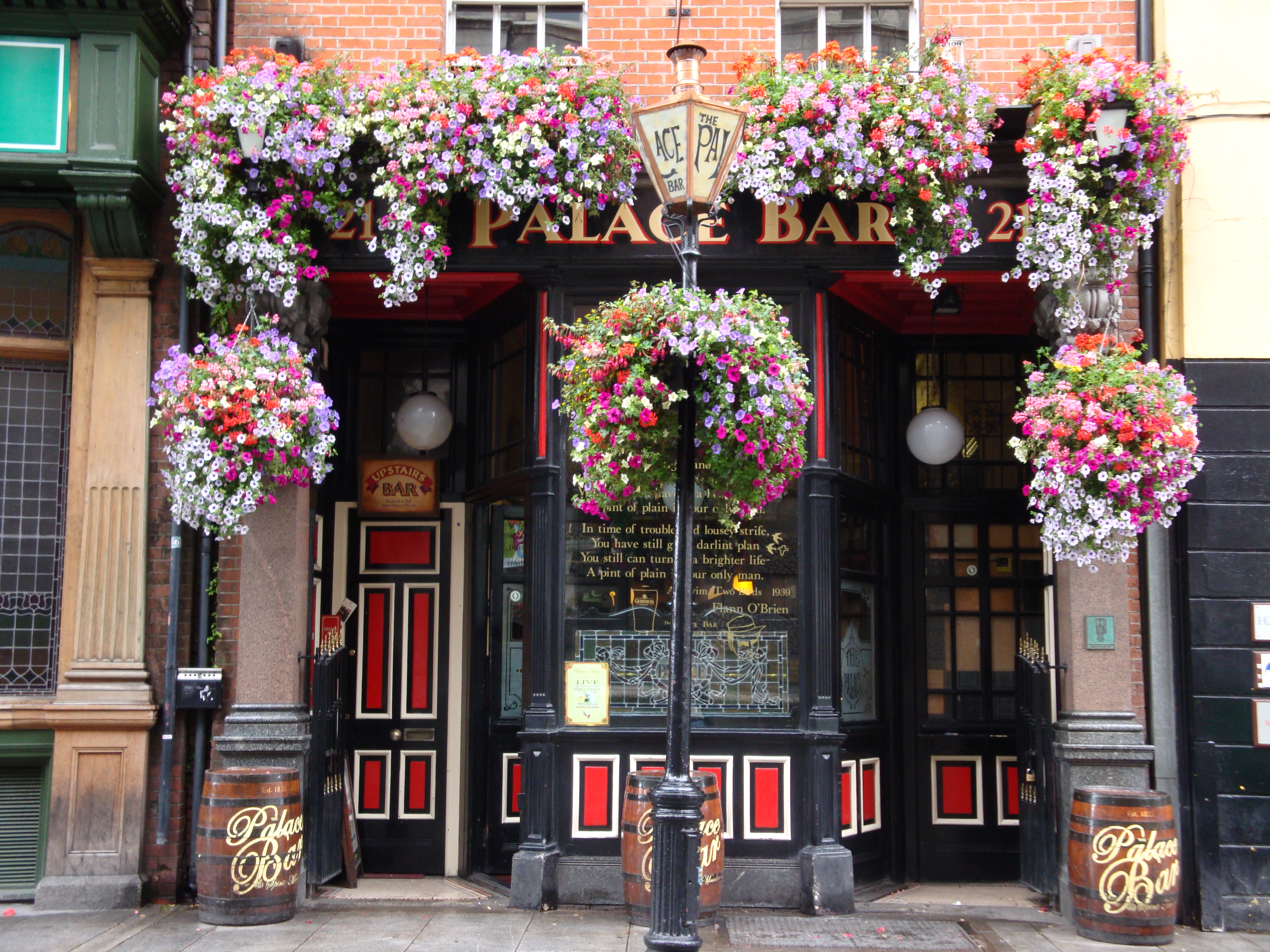 Our Special Reserve Jameson tasting started with a surprise blind tasting. Gerard Garland and the Celtic Whiskey Shop asked us to identify an old Jameson 12 Year Old JJ&S Liqueur Dublin Whiskey. John Jameson and Sons Liqueur Twelve year old is an old Italian import of JJ&S 12 year old that is most likely from the 1950s or 1960s. It amused our crowd before the tasting of our whiskey number 1. 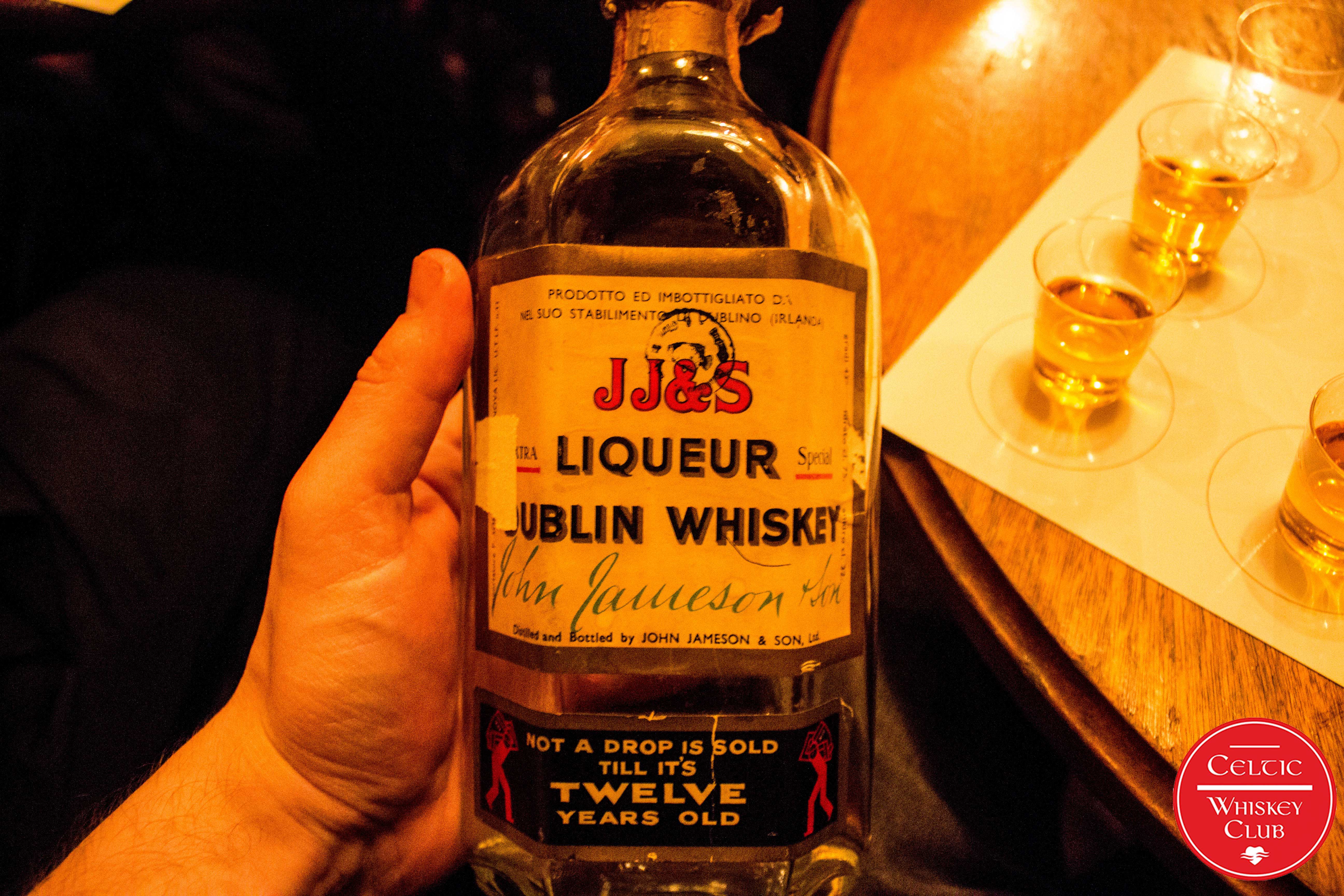 Find this bottle in store here.

This is a very rare Jameson bottle. This 15 year old Jameson is pure pot still whiskey, with no grain whiskey content at all. Bottled for the Millennium, this Jameson, is a very special reserve of fewer than 200 exceptional casks, selected for the occasion and considered by many connoisseurs to be the finest produced. It’s now almost impossible to find. Only 40000 bottles were produced. To signify this rare and valuable whiskey each bottle were individually numbered and became a genuine collector's item over time.

Without any surprise, it was the crowd’s favourite. 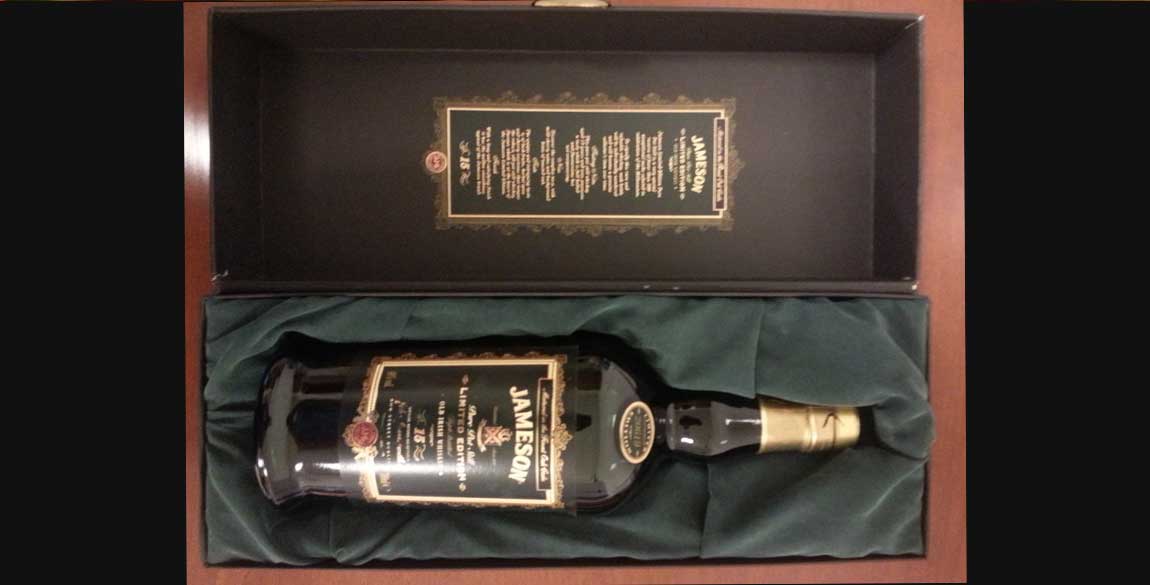 It’s a full bodied and flavoursome taste but not overpowering with a creamy mouth fill of spicy pot still. It’s a complex nose, with mild sherry notes and background hints of toasted oak. On the palate the fruits, sherry overtones temper the robust old pot still whiskey flavour. It ends with a strong and satisfying finish with a mellow smoothness.

Launched in 1980, Jameson 12 year old Special reserve is a blend of pot still and grains whiskey aged in bourbon barrels and sherry with a maturation age from 12 years to 20 years. The extra aging adds considerable depth and complexity to the post still character. There’s a heavier sherry flavour than in the normal Jameson range in this Premium best-selling aged Whiskey. Jameson is known for its wood experimentation. The sherry casks are sourced in Galicia in the North West of Spain and Portugal and are filled with Oloroso Sherry in Jerzey. These barrels give the whiskey an extra smoothness. In this one, 30% of the cask are old Oloroso sherry casks. 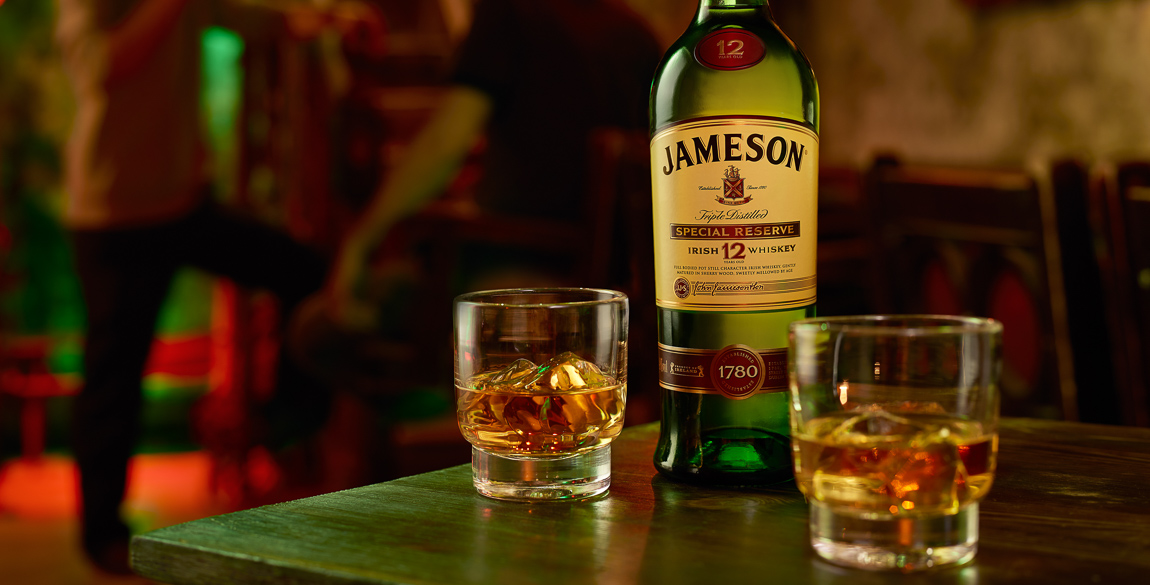 There’s some spiciness on the nose, hint of dried fruits, Christmas cake and cocoa. On the palate, you can taste more tannin from the wood, a sherry richness with dried fruits, nutty flavours and some cocoa overtones. The mild woody flavour from the grain aged whiskey influences the warm and long lasting finish.

Jameson Gold started out as a limited travel retail exclusives edition expression that was originally created for the Asian market. It’s been proved to be so popular - and brought home by Irish barmen expats - that it was added as a permanent member of the Jameson range. This 43%, was re-launched in 2012 as a core range Jameson and has now been discontinued. It was tweaked a little since it first appeared. Now, it seems to be more rounded and harmonious than initial releases. The Jameson Gold features three well-aged pot still whiskeys, one of which was aged in American virgin white oak barrels, and finished in Sherry oak for one year. The composition of Jameson Gold is quite complex with lots of different pot still and grain components, coming from the three different whiskeys from 8 to 12 year old and three different woods used (virgin oak, bourbon and sherry) all coming together in an elegant and smooth package. 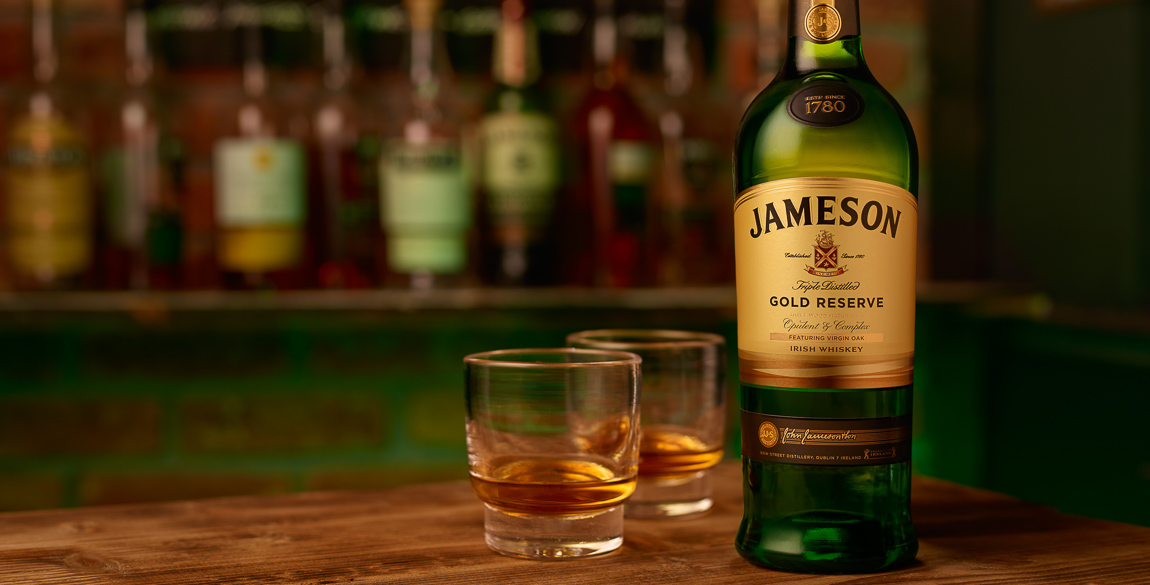 Sweet sherry taste, wood fragrance, full of spices and sugar on the nose, typical of a rich pot still. Gerard also noticed some “fragrant floral notes”. Eruption of creaminess, rich oil and honey sweetness with more sugar and vanilla on the palate that come together to finish on a sweet spiciness note from the tannin and woodiness of the American oak. The finish carries well with a pleasant peppery finale.

This is one of the newest additions to the Jameson range and is also known as Jameson Black Barrel. It’s a rare small batch bottling. A bit different to the rest of the Jameson range: having some nice flavours of chocolate and spice added to the usual mix. The term 'Black Barrel' was used because some of the spirit is matured in heavily charred 1st fill bourbon casks. This charring gives more cask influence with some butterscotch, dark chocolate and vanilla flavours coming through. The remainder of the casks used are first and second fill bourbon barrels which add some balancing sweetness to the blend. 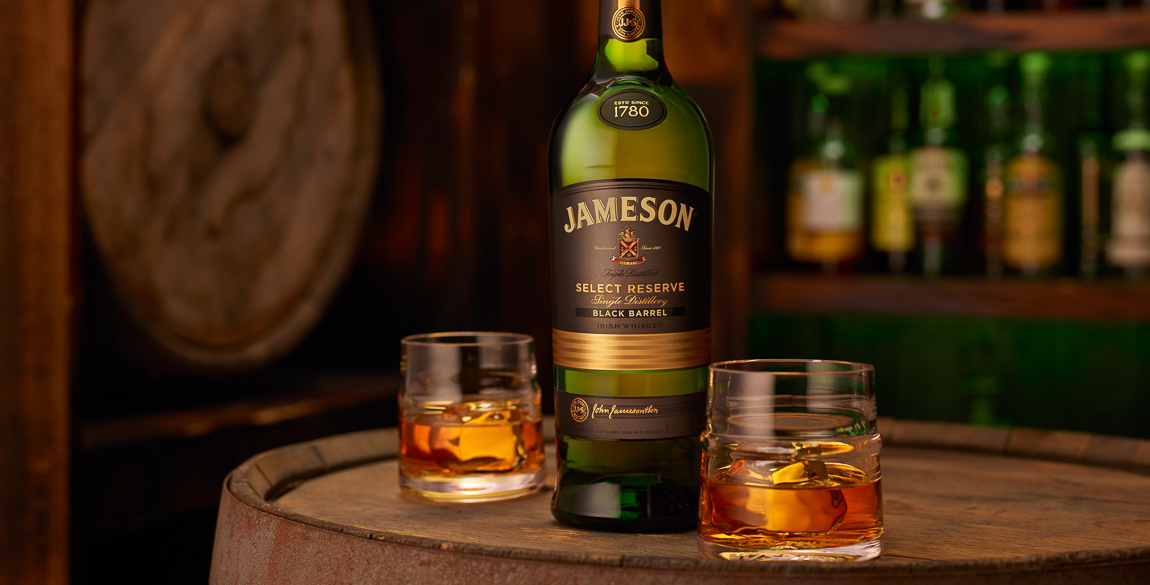 It’s very rich on the nose with berries and sherry notes. When I smelt it, all I could think of was ‘dessert’: delicious cake with toffee fudge dusty nose, berries, dark chocolate and truffle. There’s depth in the flavour coming from the mix of youngest oldest whiskeys (including 18 years old) with spices, dried fruits, marshmallow, mix peel, apricots and burnt caramel. It ends with a spicy, bitter chocolate finish. Overall, it’s a whiskey that would be delicious with sweet desserts.

The Jameson Vintage Reserve is a very special blend that draws its components from some of the oldest whiskeys available in the warehouses at Midleton. At its core is a generous amount of old pot still with some very old grain, but what sets it apart is probably the portion matured in a sweet, raisiny port pipe. This is a highly complex, fruity, spicy and sweet tasting blend and must rank as one of the best Irish whiskeys currently available. A rare treat.

This reminds us of some of the great heavy pot still whiskeys once produced at the Old Bow Street Distillery in Dublin, albeit a lot easier to drink. Varying styles of pot still whiskeys dominate this luxury blend, which has only a small amount of grain whiskey added to bring some extra smoothness. The age of the whiskeys varies between 18 and 26 year old. The  hand-selected oak casks from Europe and America, are predominantly first fill sherry and refill bourbon which are carefully selected before being married for around six months in first fill bourbon casks. It's made in batches, so it differs a little from year to year. It’s a lovely Irish whiskeys with a good bit of sherry cask richness. 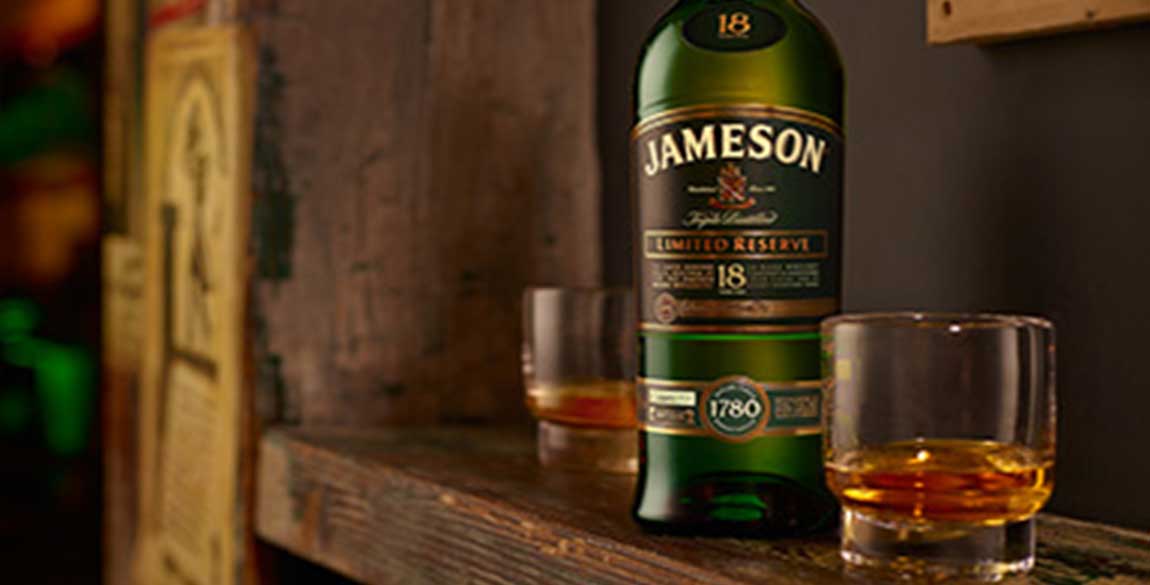 We ended up the tasting with two rare bottles from the 1970's from the Bow Street Distillery. 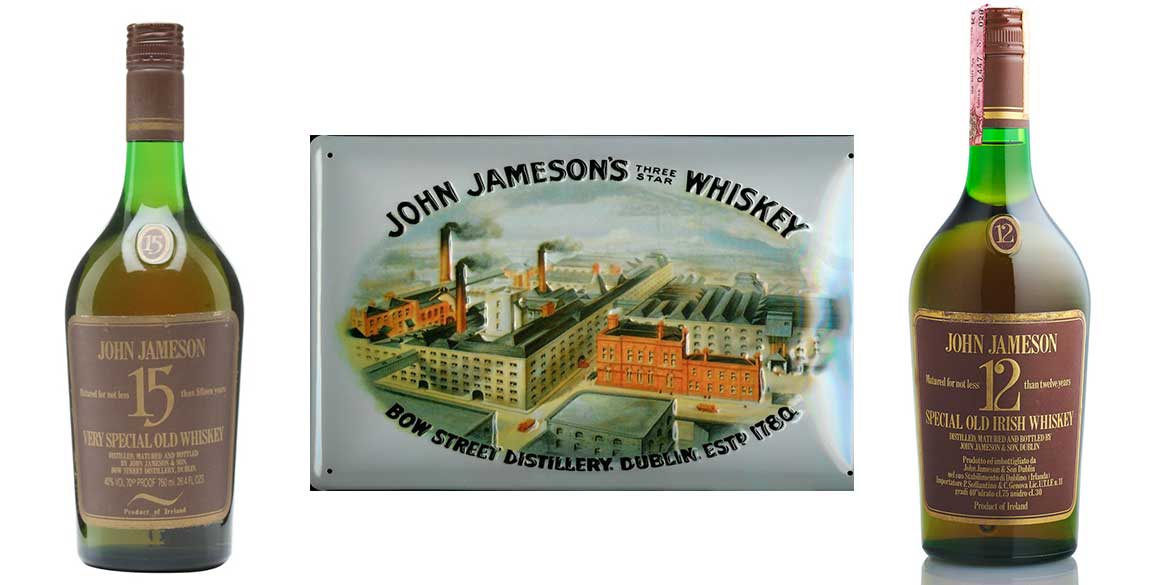 About the Bow Street Distillery

In 1965, it became more of a maturation place. Despite joining forces with their rivals (Cork Distillers Co. & John Powers) to form the Irish Distillers Group in 1966, the distillery closed in 1971. Irish Whiskey at the time, had to face American Prohibition, trade war with Great Britain, and the introduction of Scotch blended whiskey. The operations were moved out of Dublin to the new Jameson Irish Whiskey Distillery in Midleton fully operational in 1976. However, in the 2000s, it was decided to convert the Old Jameson Distillery’s building into a visitor centre that was opened to the public in 1997. 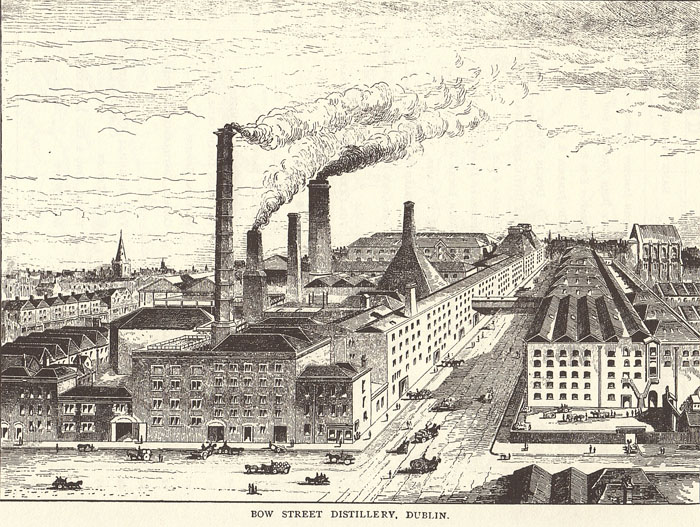 The 'brown label' Jameson is a very rare collectible Irish Whiskey made in the Bow Street Distillery in the 1970s.  This bottling was one of the last to be released from the bow street distillery and it definitely tastes of an older style pot still from Bow Street.  After trying it I have no doubt that IDL made the right decision to move cork into a new distillery as the quality of this isn’t anywhere close to the Jameson 15 year millennium edition.

The nose is quite surprising! It smells Worcestershire sauce. I also heard someone said ‘cheddar’. Powerful favours of pot still grain with light fruits overtones from the sherry cask.

Find the bottle in store here.

This is an old Bow Street era Jameson that was bottled at 12 years old and made for the Italian market. The dusty, oily character is typical of Jameson whiskey from this era, with a good dollop of wood too.

Again we have a lot of wood and spice just like the 15 year old but again like the 15 year old I have to say the 12 year special reserve is streets ahead of this.  Both the 12 and 15 bow street bottlings where fantastic to try but there is no doubt that modern technology and high tech distilling equipment have contributed to a better glass of whiskey in 2016 compared to 1970s.

Find a few snaps of the night on our Facebook page. 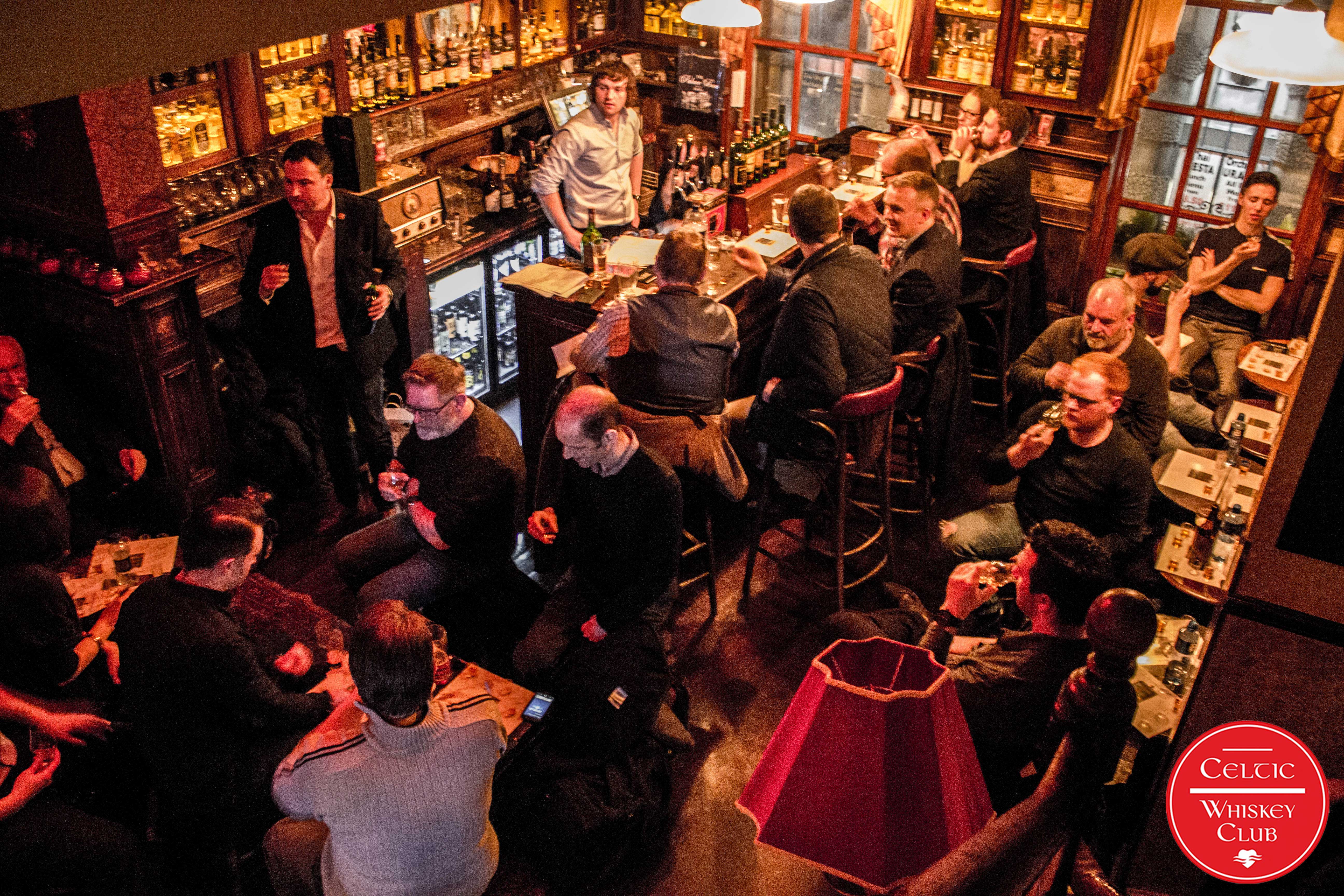